Home PS3 How to use PS3 Media Server
PS3

How to use PS3 Media Server

Hi guys, I hope you all well. In this article, I am gonna teach you how to use a PS3 media server. Actually, the PS3 media server is a DLNA ( Digital Living Network Alliance ) Compliant UPnP media server. It originally was written to support the PS3 (PlayStation 3). It has been expanded to support a range of other media renders also Xbox 360 Sony television Samsung as well as portable devices.

Furthermore, DLNA ( Digital Living Network Alliance ) compatible server device has two different functions. Servers – distribute media such as Video, image, or music files, and the clients receive and play the media. It is also powered by FFmpeg, tsMuxeR, AviSynth and MEncoder which combine to offer support for a wide range of media formats. 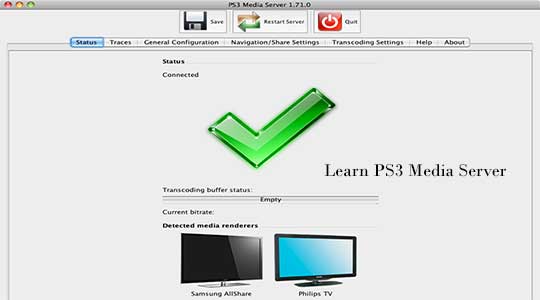 How to use PS3 Media server introduction:-

Start setup the DLNA server so that it can be used by the PlayStation 3 (PS3). Mention device can be used as DLNA Media Server.
All devices support the standard DLNA also including all product of Sony companies and other. PC (Personal Computer) with Window Media 11 Player installed.

Using an AV device as a DLNA Media Server:-

Go to the setting and “Enable” the DLNA Media Server function of your Connected device to make its content available for shared access. This setup method is varies depending on your connected device. If you want more information about AV device DLNA to read the introduction refer to the device.

Make sure you have the video codecs. It’s needed to play Videos on Xbox 360 and it’s also worth click on the transcoding tab.

Summary:- You can share everything using PS3 media server including Xbox 360 and all other Media device. I hope this article helps you. If you have or query related to this article. Please feel free to contact us. We will help you to resolve your problems. Like our Facebook page and subscribe to our push notification for future updates. You can also find us on YouTube. Our YouTube tutorial will show you how to Jailbreak a PS3, Game Updates, News, and much more.

Hi, I'm Shaaz, the founder and owner of SuperPSX.com. I created this website back in 2015.

How to Find PS3 IDPS OFW

How to Mod GTA 5 No Jailbreak

How to jailbreak a PS3

How to jailbreak a PS3