Dear friends, its good news for you that you can update your PlayStation 3 system software. The new PS3 Official Firmware 4.82 is launched by the Sony Interactive Entertainment on November 14, 2017. The new system software Firmware 4.82 will improve the quality of the system performance as per the Sony. Before updating your system, you should have a free space of minimum 200MB on either USB stick (PC Update) or the PS3 hard disk drive (System Update). Due to this update, maybe you not able to play without first updating the PS3 system software.

When Sony was released official firmware 4.81 in November 2016 at that the Sony comment that “This system software update improves the quality of the system performance”. So it means there is no difference in between firmware 4.81 and 4.82 as per the Sony comments. Can the users find the difference on their own? Some of the users already had given their comments on the different portals and they say that “the new update provides quite a stability but more than that technical issues and problems”. So as per our point of views, for the time being, please continue with the firmware 4.81, until the next update. 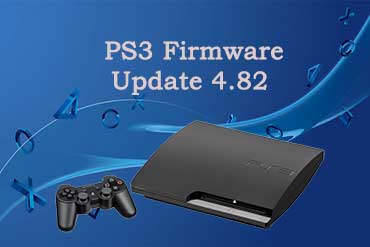 When the Sony released firmware 4.81 in November 2016 and the users updated it on their system, they faced many problems like not able to jailbreak the system and others. I already mentioned in my article the truth behind PS3 Jailbreak, Sony firmware update is not only mean that add some new feature and improve system performance in your system. Sony knows that there are many software and files are available in the outside market such as Pexploit lite, Muxport, TrueAncestor backup retailer and PS3 Jailbreak (CFW) file that unlocks the Sony system hidden features or injects ps3 game using the PS3 backup file.

Sony never appreciates it because the Sony is the main manufacturer of the gaming consoles. The system unlocks or injecting games falls the Sony in the loss. Because nobody will purchase game DVDs. So, Sony updates his software from time to time with more complex coding so that the other software will not unlock or work on its hidden features and shows different error codes.

As everyone, knows PS3 OFW 3.55 will break easily and in OFW 4.75 it’s easy to inject any ps3 game using PS3 game injecting software as I mentioned above Pexploit, Muxport and TrueAncestor backup retailer. But for OFW 4.81 users it’s very hard to inject PS3 games and jailbreak. OFW 4.81 users can install all the games into his console but at the time of play, they show error like renew license or error 8001006 and many more.

Thier can be many reasons behind it. The biggest reason is IDPS.bin file not found for OFW4.81 users. The IDPS file must require for injecting PS3 games on OFW without Jailbreak.  But the users of OFW 4.75 can get this file very easily using PS3proxy server or IDPSSteller.

So it’s our suggestion to you that please do not update your firmware to 4.82. Just stay in firmware 4.81, maybe we found a way to jailbreak firmware ps3 4.81. Which is still not jailbroken his console and 4.82 users will think for they shouldn’t update his console.

Summary: I hope guys, this article helps you to understand about PS3 OFW 4.82. Please read the whole article and support us to stay connected with us. Like our Facebook page and subscribe to our newsletter for the future updates.

Hi, I'm Shaaz, the founder and owner of SuperPSX.com. I created this website back in 2015.

How to Make PS3 Backup and Save Data

Then how can I play multiplayer mode,it needs latest update.reply me ,thanks….

Everything You Should Know About PS3